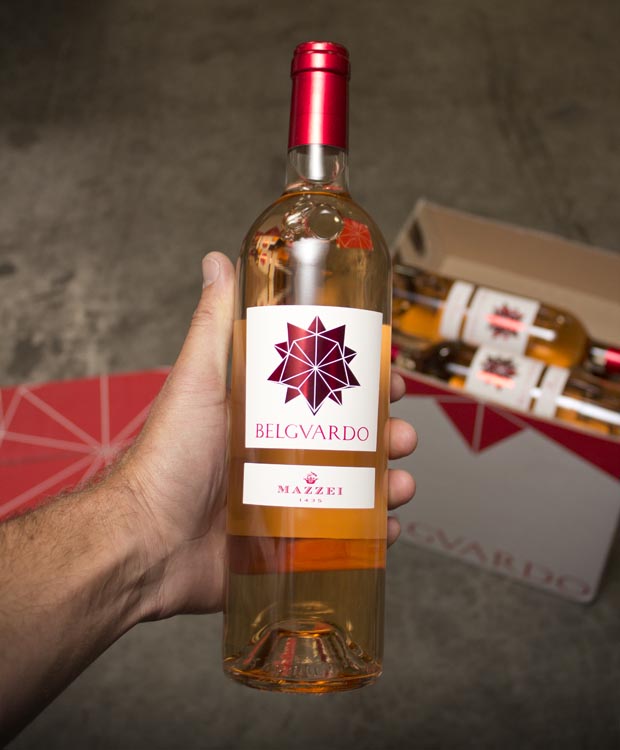 So….we heard there is some other online website doing a sale or something? It’s like...Oomaxon? Or...well, whatever, we got your prime RIGHT HERE, oh yes.

NEARLY 70% OFF! (now is when your eyes widen and you get a little hit of adrenaline, are we right??)

Drop EVERYTHING and do WHATEVER you need to that will allow you the 30 seconds needed to slam a full case of this into your cart (that is, uh, $96, kids --- prime indeed). EIGHT DOLLARS a bottle. Yes. Released at $25. Tuscan rose -- bone dry delicious, flowers, crisp zippiness, CRAZY drinkable and of course, simply melon-twistingly stomach-droppingly well priced. WOW!

To the wine. We recommend drinking this like water -- it is, after all, priced about the same. How did we pull this off? Well, it involves a LOT of pasta, we can tell you that much. INCREDIBLE! SO --- Mazzei is a wine we have sold before (the reds) and they get much love from the press. It has a fascinating history, too -- Philip Mazzei was a friend and contemporary of Thomas Jefferson and many of his ideas about freedom and equality were adapted by Jefferson. He even has a US Postal stamp to commemorate his 250th birthday back in 1980. One thing we know for sure TJ and Mazzei drank a LOT of wine together, smart men that they were.

And YOU? Let’s drink together. With the second glass in front of us (first was with a goat cheese omelet, thanks for asking) we can tell you it drinks WILDLY well --- rose petals, cherry whiffs, orange blossoms, clean and pure and so friendly as to dance off into the sunset and live happily ever after. Made from Sangiovese and Syrah, it is all purity and fresh, tart cranberry notes, too. As noted, dangerously easy to drink!!

It’s gonna get NUTS up in here today, so please grab it quick! Have a super-primo day!

Don't let the age fool you - this rose delivers the goods in spades and is drinking great right NOW.
Previous Next

A long lasting bond unites the Mazzei family with Tuscany and wines since the XI century.

Ser Lapo Mazzei is the author of the first known document to use the "Chianti" denomination in 1398; in 1435, when his granddaughter Madonna Smeralda Mazzei married Piero di Agnolo da Fonterutoli, the holding became part of the family's estate.

Later, Philip, who enjoyed calling himself a "Citizen of the World", befriended Franklin, Adams, Washington, and Jefferson; the latter invited him to introduce vine growing in Monticello, Virginia.

First at Castello di Fonterutoli and then at Belguardo and Zisola, the Mazzei family has undertaken a program of sustainable management of their farming activity with the objective of guaranteeing the stability of the ecosystem and its biodiversity.

This lead to the complete elimination of weeding and chemical topdressing, recycling of production waste (shoots, grape stalks, marc, olive pomace, and horse manure) for the production of company compost to be utilized as completely organic fertilizer.