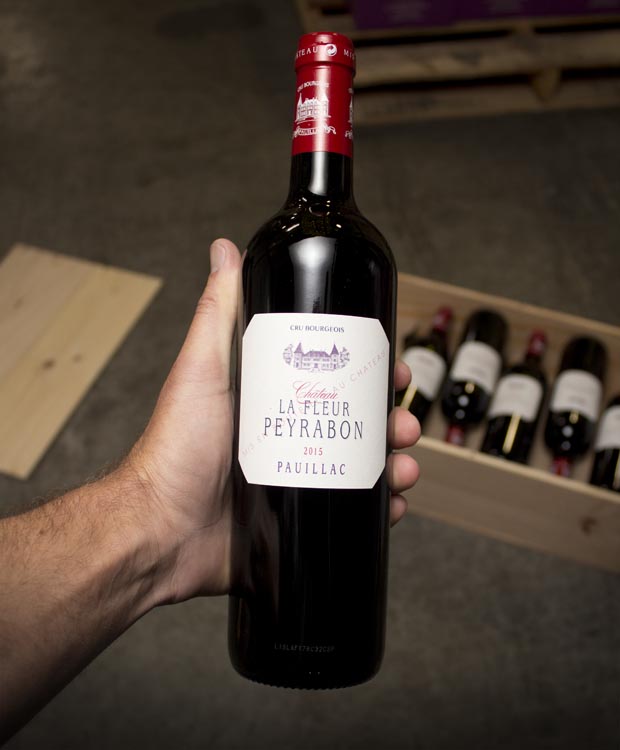 BOOM! 93-POINT BORDEAUX! We’re dropping gems on your melon here on a Tuesday! Not any Bordeaux either, we are talking Pauillac (!), the land of Chateau Lafite, Chateau Latour, Mouton, and all the big guns...OVER 50% OFF -- say WHAT??

Take the fact that Chateau La Fleur Peyrabon has been on a MASSIVE qualitative upswing the last 6 years or so, combine it with the fantastic, succulent, sexy 2015 vintage in Bordeaux, and then blend that up with our reality-bending, eye-popping price and you have got yourself a stupendous no-brainer of a deal --- this stuff just SINGS with Cabernet joy. Did we mention 93 points?

Seriously -- terrific, real-deal stuff. We tasted dozens and dozens of wines in March during our 48 hours in Bordeaux, and we went HARD to snag this. SO. GOOD! As we discovered, this is somewhat of an “insider” wine in Bordeaux, and a lot of it gets consumed by the French themselves (well, wouldn’t you?), so there’s not a lot to be had in general for the world market. EXCEPT TODAY! We have a nice little stack of wood cases fresh off the container from France and ready to rock --- but best to be as expiditiously uber-quick as possible-- we never hold on to kickass Bordeaux like this very long! The wine is lush, blackcurranty mouth-watering-ness with fine length and beautiful harmony and the richness and generosity of the vintage. Terrific -- no other word for it (except maybe “stellar” or “ravishing”). WILL GO FAST!

Gentle aromas of oak blend with the dark berries and anise that are present on the nose in this wine. Earthy and robust on the palate with notes of red berries and structured tannin.

Situated in the appellation of Haut-Medoc, Chateau Peyrabon is a cru bourgeois with a strong personality. Its current owner Patrick Bernard, of the wine merchant Millésima, fell under the spell of the charming 50 hectare estate of promising gravel terroir in 1998. Since then, M. Bernard and his team, led by Xavier Michelet, have been passionately dedicated to creating authentic wines that are elegant, silky, and marked by their freshness and fruity character – typical of an excellent Cabernet Sauvignon.