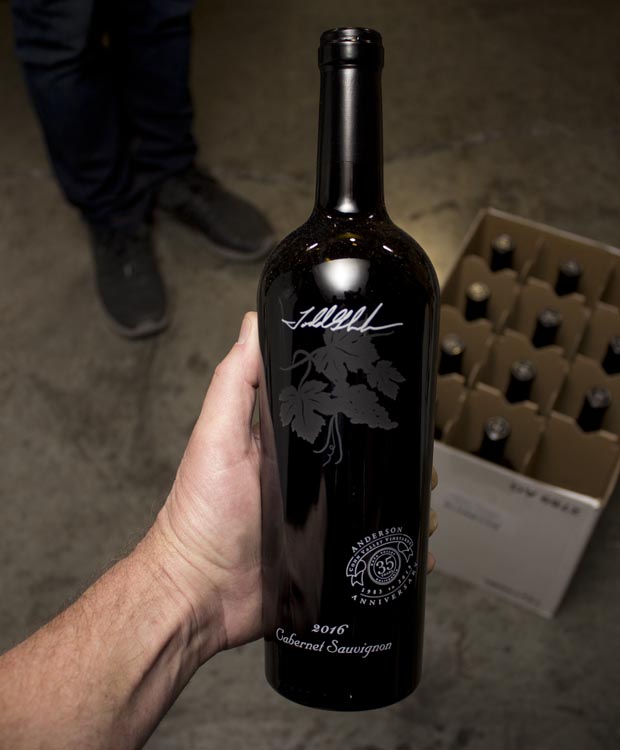 Oh, all right. Robert Parker Wine Advocate 93-POINTER Napa Cab at best price you will ever see, anyone?? We’re hesitant to gush too much, because we didn’t get NEARLY what we would have liked to -- ah well, so be it. Sellout day for sure!

ACV. Anderson’s Conn Valley. These old-skooly dudes have been making beautiful, crazy-well-priced Cabernet for a long time, but 2015 was their first for a “Napa-designate” Cab. We sold out of THAT one in a flash last year, and the killer 2016 will be different. NOW ---- a warning!! This is not for those who prefer an elegant, subtle wine --- no. This is lush, lavishly spicy/oaky/mocha-ish stuff. THE PRICE! C’mon’!

That’s it. We’re just not saying any more...except...good luck! Hope you opened this email early!

For years, only the very best Cabernets made it to the Estate Reserve and Eloge programs. In fact, for the longest time more than half of the vineyard’s produce was either sold off, and the very best kept for us.  Today, these old vines are producing so much top quality Cabernet it is actually hard to sell it off to anyone.  With the 2015 vintage we decided to bottle it as our first ever “non-reserve” Cabernet.  There’s less new wood, and a bright, fresh, easy to drink structure to the wine. Not good enough for the Reserve, but way, way too good to get rid of it. These days, our customers are buying two, three (even eight!) cases at a time, which we think is absolutely wonderful.  It has that same Anderson Conn Valley flavor and terroir you expect, but in a fruit-forward, ready to drink style.

Anderson’s Conn Valley Vineyards in Napa is just a short drive from downtown St. Helena. It is a charming timepiece of a traditional Napa winery, featuring world-class fine wines at affordable prices. Conn Valley Vineyards is lucky enough to sit in the lap of Napa Valley which affords our talented winemakers access to some of the finest grapes in the world. With this year’s vintage offering exceptional balance and complexity due to extended maturation on the vine, Anderson’s Conn Valley Vineyards has produced some truly spectacular wines; including crisp, vivacious white wines and lush, textured red wines.