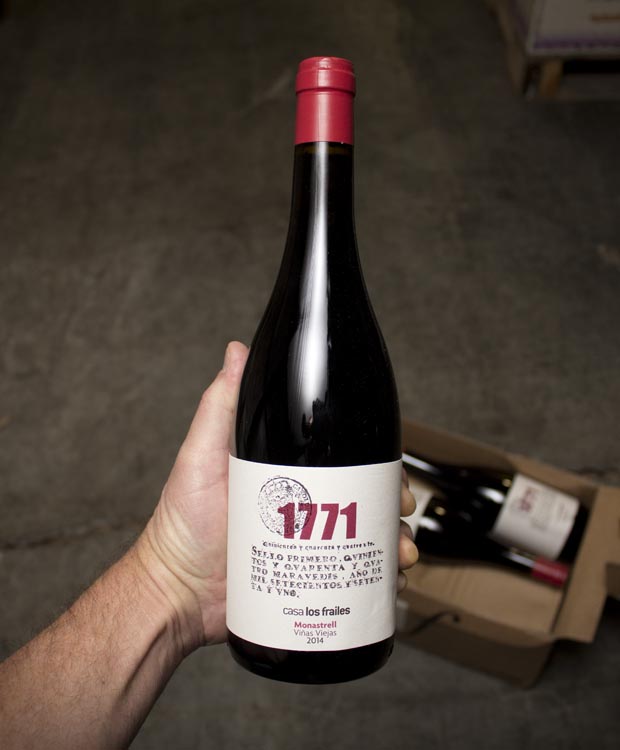 Awww, snap, of course we are. Do you know what you pay for a 93-POINT Spanish blockbuster these days? Or a Napa Cab for that matter?? $50? $100? $200? Nope, nope, try $18 from your buds at Last Bottle, who tirelessly and mercilessly uncover amazing buys with all of our powers!

** 93-point ambrosia like this NEVER lasts. Gotta be quick today…

OK, ok, so here we have this LUSCIOUS, intensely savory, complex 100% Monastrell (82+ year-old vines!!) from Bodegas Casa 1771 (the year the property was founded) that we were astounded to get any of and -- WOW -- get ready to have your brain flooded with serotonin as you try to grok the flavors going on in here -- roses, rose petal, flowers, perfume, incense and then comes the deep red fruits, warm richness and THEN comes the iron, umami, wild smoked meats and earthy, toasted wood ...dang! Changes and morphs in your glass, too, as you make your way through the bottle. Rich and complex, yet not a heavy wine at all --- brilliant! Did we mention 93 points and $18???!

1771 Casa Los Frailes is made with the oldest bush vines of 75 years-old
Monastrell located in a calcareous soil, very poor and little evolved.
1771 is the year that our ancestors purchased the estate in public
auction from the King Charles III of Spain who in turn had expropriated
it to the Friars (Frailes in Spanish, that is the reason the estate is
known as Casa Los Frailes). The label is a reproduction of the original
contract that we, as the 13th generation, still are keeping it. It is a Monastrell from original clones inherited from generation after
generation, adapted to our soil and Mediterranean climate. It is a
singular Monastrell, light skin, no much colour, delicate, elegant,
fresh and exceptional long tasting.

Casa Los Frailes is located in the valley called “land of Alforins”, south west inland province of Valencia, with average altitude of 650-700 meters above sea level. The valley is located between two mountains range, on the east the Mediterranean Sea (50km) and on the west the main “plateau” of La Mancha. It is a region with long and well documented human settlements. The Iberian settlement dated IV BC century is outstanding. Via Augusta Roman Road, the longest at the time from Rome to Hispania, passes onto Casa Los Frailes. The landscape is so beautiful that in the XII century, Christian King Jaume I The Conquer, when passing through after releasing the city of Valencia, established the area as “Royal Domain”. After the moors were expelled in the XIII century, first vineyards were farmed and with the settlement of the Jesuit Friar Order, wine was elaborated. Most of the farm-estates in the area have their own buried amphoras cellars.