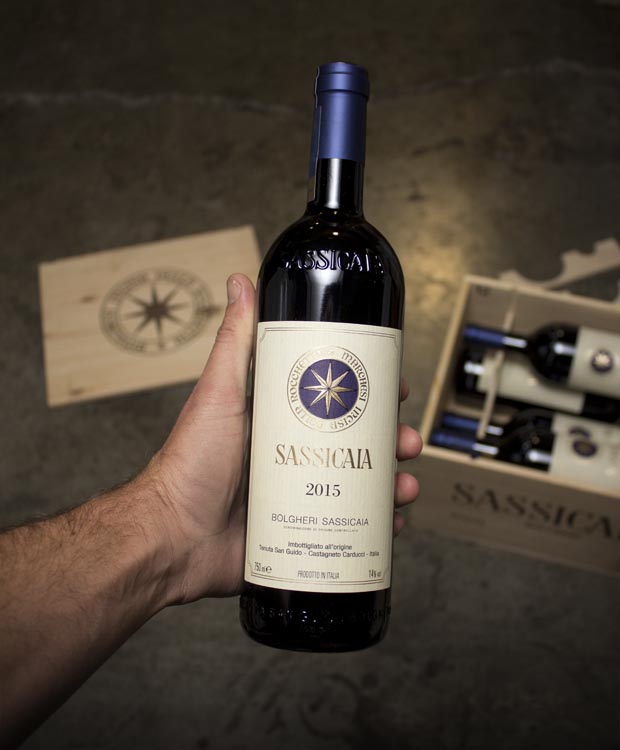 Wine Spectator #1 Wine of the Year!!!

Tenuta San Guido is named after the Saint Guido della Gherardesca who lived during the XI century. It is located on the Tyrrhenian coast, between Leghorn and Grosseto, in Maremma an area made famous by Italian Nobel prize winner Giosuè Carducci, and it stretches for 13 km from the sea to the hills.

Three are its defining characteristics: the Sassicaia wine, the Razza Dormello-Olgiata thoroughbred studfarm and the Bird Sanctuary Padule di Bolgheri. They divide the estate between the Padule on the coast, the horse's training grounds on the plain, and the vineyards planted up to 350 meters on the hills. The latter have been given their own DOC, the DOC Bolgheri Sassicaia, the first, and so far only case in Italy of a DOC contained in one estate.

The wedding of Mario Incisa della Rocchetta and Clarice della Gherardesca on October 18th 1930 started it all.

They shared a love for thoroughbred horses that made them form a partnership with horse breeder and trainer Federico Tesio. Mario Incisa's love of good wine made him plant Cabernet vines in 1942 for what was to become Sassicaia. Seventeen years later the Bolgheri Bird Sanctuary becomes Italy's first private nature preserve.

In the 1920s the Marchese Mario Incisa della Rocchetta dreamt of creating a ‘thoroughbred’ wine and for him, as for all the aristocracy of the time, the ideal was Bordeaux. This is how he described it in a letter to the esteemed wine critic, Luigi Veronelli dated 11 June 1974:

“…the origins of my experiment date back to the years between 1921 and 1925 when, as a student in Pisa and often a guest of the Salviati Dukes in Migliarino, I drank a wine produced from one of their vineyards…which had the same unmistakable “bouquet” as an aged Bordeaux….”

In the 1940s, having settled with his wife Clarice on the Tenuta San Guido on the Tyrrhenian coast, he experimented with several French grape varieties (whose cuttings he had recovered from the estate of the Dukes Salviati in Migliarino) and concluded that the Cabernet had "the bouquet I was looking for."

A wine made mainly from Cabernet Sauvignon was a fundamental change to the Tuscan and Piedmont tradition of Sangiovese and Nebbiolo, respectively. The innovative decision to plant this variety at Tenuta San Guido was partly due to the similarity Mario Incisa had noted between Tuscan terrain and that of Graves in Bordeaux.

‘Graves’, or ‘gravel’ in French refers to the rocky terrain which distinguishes the Bordeaux area; similarly, the gravely vineyard sites in Tuscany impart the same characteristics on Sassicaia, "stony ground", as its cherished French brother.

The Marchese's first vintages were not warmly received. Critics accustomed to light, local wines were not encouraging; it was not taken into consideration that wines made from the more complex Cabernet Sauvignon grape would need more time to mature and develop.

And thus from 1948 to 1967, Sassicaia remained a strictly private affair, only to be consumed at Tenuta San Guido.

Each year, a few cases were stored to age in the Castiglioncello di Bolgheri cellar. The Marchese soon realized that by ageing the wine it improved considerably.

Friends and relatives now urged Mario Incisa to experiment further with his project and perfect his revolutionary winemaking style. It was not until 1968 that Sassicaia was first commercially released – the welcome was worthy of a Bordeaux Premier Cru.

Over the next few years, the cellar was moved to a temperature controlled location, steel fermentation vats replaced wooden vats, and French barriques were introduced to the aging process.