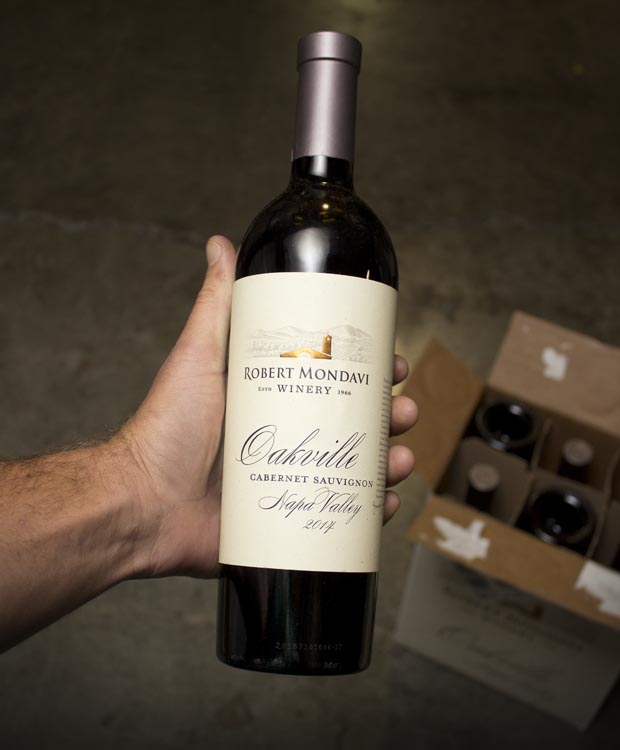 We’re not known for hyperbole. Nope. We’re calm. Reserved. Judicious. Composed, if you will, even a bit shy.

SCREW THAT!! Did you see the price we have on Mondavi’s OAKVILLE CAB?? 100% TO-KALON FRUIT! 92 points, are you crazy? Are we crazy? No, we bust out the work every day to score amazing wines like this for you, you amazing people! Gads we love you. We have been working on this deal for months! Wow! DO NOT delay --- we insist and implore that you have this rich, full-bodied, cherry and dark blue cassis fruit-packed brilliant bottle of wine! Did we say wow?

Got some? Cool. Whew! There is not much.

“Creamy...ample....such beauty….hugely appealing…” -- just a few words from the critics!

Mondavi you know, but “To-Kalon” is the key here, of course --  this legendary Oakville vineyard shared by Mondavi and Andy Beckstoffer is one of the greats for Cabernet on this planet (do a Google search and be prepared!). You can taste the pedigree and regality of it right away (well, as soon as your box lands on your porch or office or whatever). It’s always pumping out the creme de cassis flavors, with the broad, rich, mouthfilling Cabernet fruit and spice that you crave, oh yes. A bit of mintiness and mocha infuse this as well. SO good. Utterly astounding to drink To-Kalon at anything NEAR this price (it is typically at LEAST $175 if it is from the Beckstoffer side!!), truly. Tons of great scores to boot! DO NOT wait an extra minute, we bought as much as we could but…

Robert Mondavi hardly needs an introduction. He is to wine what Steve Jobs is to the cell phone. A visionary who saw the potential in California, and Napa Valley in particular, to produce world class wine that could rival the best of Europe -- or even surpass it.
Previous Next

"I've always wanted to improve on the idea of living well, In moderation, wine is good for you - mentally, physically, and spiritually."

Robert's foray into wine began when his parents moved to Lodi in 1921, which was then the winegrowing capital of California. By the 1930s, he became more interested in fine wines from Napa Valley, and he eventually worked at Sunny St. Helena Winery (now Merryvale). In 1943, he learned that the famous Charles Krug Winery in St. Helena was for sale and convinced his father to buy it.

Robert felt strongly they should push to make better wines, while his brother Peter favored a more conservative path, aiming to stick with larger scale and lower quality. Their disagreement culminated in a fistfight, and Robert was asked to leave the family business.

His next move was to establish his namesake winery in 1966 with a vision to create Napa Valley wines that would stand in the company of the world's finest. He visited the best regions in Europe, soaked in  knowledge about terroir, climate, using oak for aging, and other nuances that would help him achieve his vision.

He chose To Kalon vineyard in the heart of the Napa Valley as the home for Robert Mondavi Winery. This first-growth vineyard, located in Oakville, California, is renowned for producing some of the finest Cabernet Sauvignon wines in the world.

Together with his sons Tim and Michael he built a legacy
that remains firmly in place today.