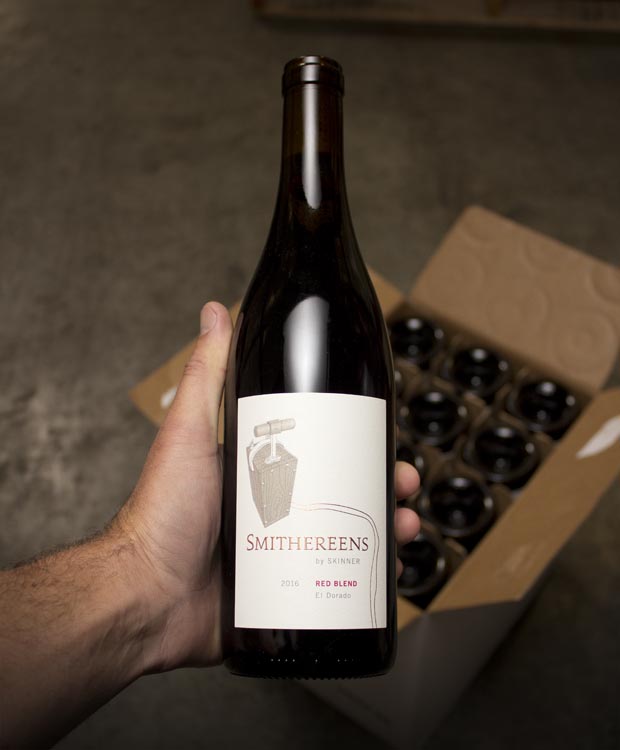 Call it a porch-pounder, call it a crowd-quaffer (hey, we just made that up!), call it the gnarliest, raddest, most sick crowd-pleasing red EVAH, but we have a few words for you --- HURRY. UP!! $12!! American dollars, too! Wow! 90 POINTS and 50% OFF to boot! Do NOT miss this one!

We knew all the cool kids, somms and always-looking-for-the-next-big-thing crowd was in love with Skinner, and well, as soon as a bottle came across our tasting bar, it was ON. We called and did the biggest deal we could!! The Skinner story is really cool, actually. Mike Skinner’s great great grandfather hit it big during the gold rush in the Sierra Foothills, and used his newfound wealth to establish one of the region's first wineries -- J. Skinner Native Wine & Brandy. Mike Skinner has carried on the tradition since 2006 and these wines are REALLY, really good --- the aroma is floating around our office as we write this!

Sweet. Got that handled! Basically a “GSM” blend (Grenache, Syrah, Mourvedre), this is intense and lush, powerfully fruited with dark black cherry fruit, jammy plum and strawberry, and light on its feet, with rich, spicy warm baking spices, aromatic French oak and all in a silky, round package. Outrageously good for the money --- this is a “case me” kind of thing --- while it lasts, that is...

Skinner Winery brings an immense and impressive history of winemaking extending all the way back to the 1800s. The winery's Smithereens series pays tribute to the miners of the Gold Rush using dynamite to blast out gold deposits (not the 80s band of the same name).

Carey Skinner established Skinner Vineyards with her husband Mike in 2006 after discovering that Mike was the great-great-great-grandson of James Skinner, a Scottish miner who in 1861 established one of the Sierra Foothills' first wineries. Chris Pittenger is their winemaker and was an integral part of making their vision of honoring the family legacy come to life. Skinner Vineyards was recently named one of Wine Business Monthly's 2014 Top 10 Hot Brands.