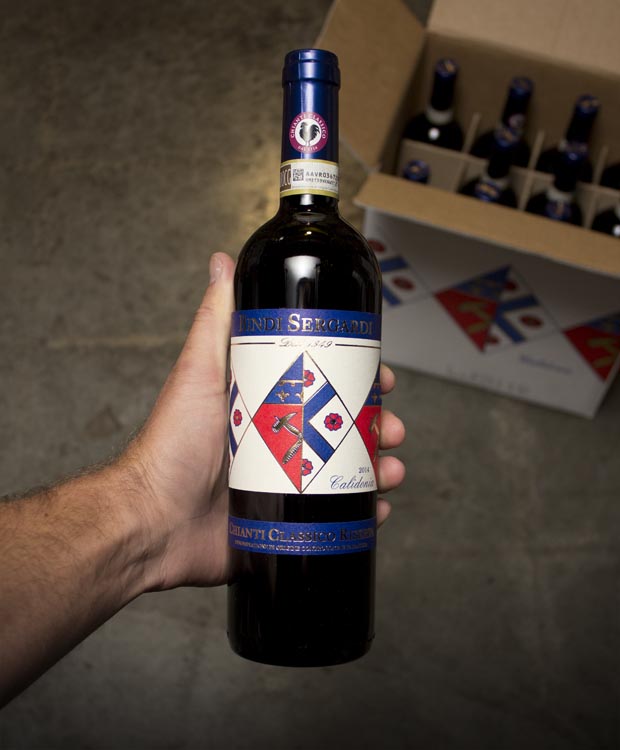 ‘15 BINDI Riserva!! Their TOP wine! It’s arguably the GOAT, an offer that is most definitely FOMO, and, TBH, Hundo P totally LIT! (sorry, teenager in the proximity as we write this) 93 POINTS! Stupendous price!

In all adultness, however, our favorite Tuscan rockstar (and yours!) just landed in the warehouse, direct from the winery, with a KILLER Riserva from the fantastic ‘15 vintage. Woo hoo! Bindi can do no wrong in our books!

A client favorite, the Bindi Sergardi family is LITERALLY royalty in this part of Tuscany, dating back to the mid-1300s when the family led an army that defeated the Aretines and were installed as governors of the Republic. As they have for 600+ years, they continue to farm grapes, olives, and animals on their landholdings. VERY cool story here for history buffs, check it out when you have time (after pouring a big glass of this and putting the pasta on to boil).

The Calidonia bottling (named for Calidonia Sergardi, who married Gerolamo Bindi in the mid-1500s) comes from the best barrels of the family’s Mocenni estate. It’s very much in the style you know and love --- deeply aromatic with flowers, roses, incense and cherries, vibrant but with an extra level of intensity and a touch more oak influence. Sexy, even, it’s just a wonderful, heart-warming expression of Chianti at its best ---- insanely great at our price. Will go mighty fast....! We never get enough of Bindi, baby!

Intense ruby red color. The nose shows fruity and floral notes together with spices and incense. Soft, elegant and well structured. Freshness, complexity, graceful and silky tannins are the result of a careful selection of Sangiovese grapes growing on Alberese and Galestro soils. This wine is vibrant and has a long and persistent aftertaste. It is an excellent expression of Mocenni’s terroir and of Chianti Classico Riserva.

Country: Italy
Region: Chianti
Varietal: 100% Sangiovese
Vineyard: Tenuta Mocenni
Winemaker: Bindi Sergardi
Aging/Cooperage: Fermentation takes place in stainless steel vats where maceration lasts about 18/20 days at a controlled temperature of 28/30°C. Shortly after alcoholic fermentation, the wine is transferred into barrels of 42 HL where malolactic fermentation takes place and where it is aged for approximately 18 months. The estate bottled wine then remains stored in the cellar for further refinement.
Alcohol: 14%

The wealth and personality of Niccoluccio Bindi allowed his son Marco to organize an army, which fought victoriously at Lucignano against the Aretines. The valor and the ability displayed by Marco on the battlefield permitted him to be elected to the government of the Republic of Siena. We are in the last years of the fourteenth century, and the family leaves its feudal properties in Rapolano behind and moves to Siena. The Bindi are successful: Giovanni in 1430 is elected to the new government of the Signoria and acquires the status of nobility in Siena. In the mid-1500s Captain Gerolamo Bindi marries Calidonia Sergardi. They have no children of their own, and decide to adopt Ottavio Sergardi, son of Calidonia’s brother. Thus the surname Bindi Sergardi is born.