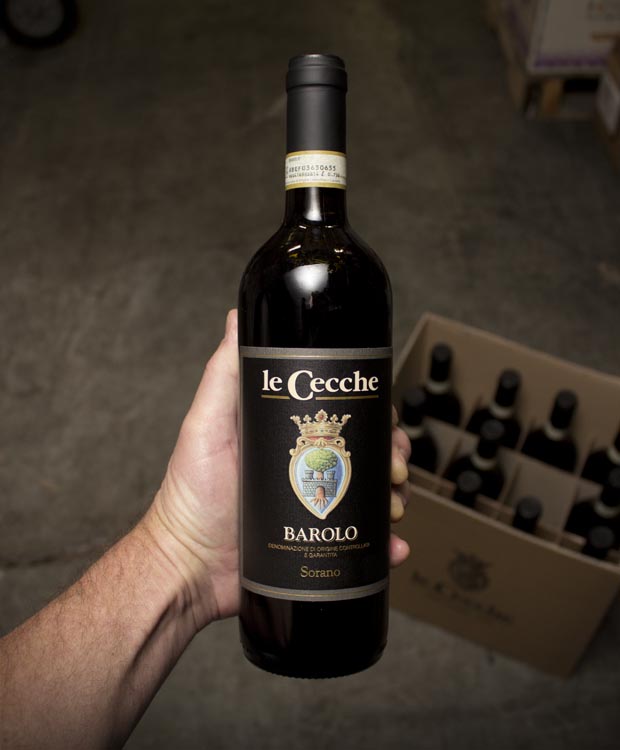 Oh, Barolo, our hearts LEAP and skip and THUNDER to the joys of not only Barolo, but OVER 50% OFF single-vineyard Barolo!! Wow!!

We literally tasted with owner Jan De Bruyne a few days ago at VinItaly in Verona, only further confirming how wickedly fine these wines are --- and at prices like this, are you crazy? Are we? No, no -- we’re VERY clear -- we want to mine for GOLD, and we hit a huge vein with Le Cecche. A wine to drink now and into the next decade!

CLASSIC, finesse-filled and just beautifully made, this vineyard (on the slopes of the town of Serralunga) is about elegance, finesse, complex, layered flavors, lofty aromatics of dried cherry, orange pekoe tea, dusty Asian spice, crisp red cherry....bright and thirst-quenching, light on the palate but filled with intriguing flavor. 2014 is a laser-sharp, zippy, clean vintage, but there was not a lot of it made! Only a tiny bit!! Don’t miss -- you don’t see single-vineyard loveliness like this come around often! Go, go go!

Le Cecche is a small hamlet of Diano d’Alba, one of the “11 comuni del Barolo” in Piedmont. With origins dating back to the 18th century, the hamlet consisted of tree small farms. Through marriages between the tree families, Le Cecche finished in the hands of the Marengo family for a long period. The last generation remained without heirs, and sold the property in 2001 to the actual owners, Jan De Bruyne, a Belgian MD and his Italian wife, Marchioness Paola Invrea.

After a thorough restoration of the buildings and the creation of a modern winery, new vineyards of Barbera, Nebbiolo and Merlot were planted on the steep south and southwest facing slopes around the house. Also the old Dolcetto vineyard, dating back to the fifties was restored.
In 2008 a vineyard for white wine was planted in Bossolasco at an altitude of 750m, southfacing, becoming one of the highest vineyards in the Langhe region.

In 2010 a vineyard was bought in the Barolo area, MGA Sorano in Serralunga d’Alba, well known for its long living wines.

In 2014 a second Barolo vineyard was bought in Grinzane Cavour, MGA Borzone , and in 2015 another vineyard in Monforte, MGA Bricco San Pietro. In total Le Cecche owns actually 6,5 ha of vineyards.
2 more hectares will be planted in Diano d’Alba with Dolcetto, Barbera and Nebbiolo.
Started with a production of 3.000 bottles in 2002, the production reached 40.000 bottles in 2017.