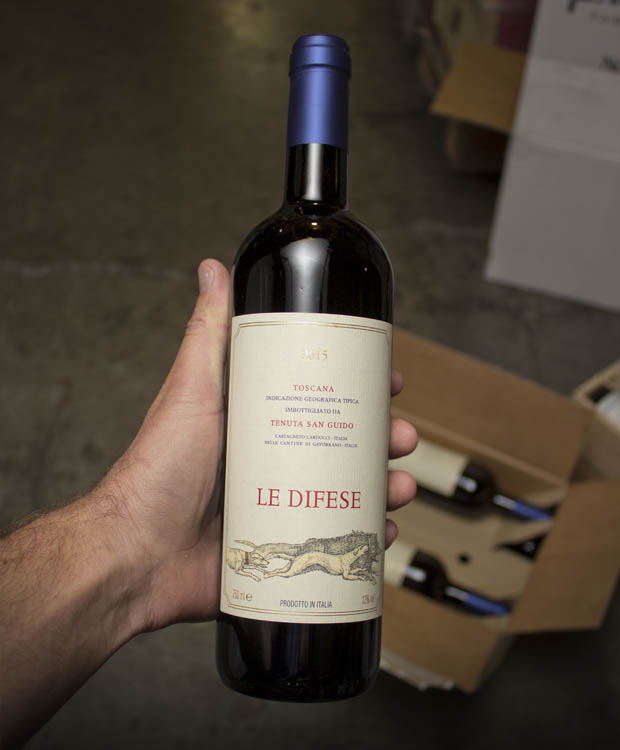 Wow! Drop what you’re doing if you love Tuscan greatness...we got one for the ages today!!

SASSICAIA. Arguably Tuscany’s greatest Super-Tuscan (along with Ornellaia) sends a quick shimmer of tingly excitement down any wine lover's back, and today we are beyond stoked to offer Sassicaia’s 91-92 POINT “Le Difese” --- a selection of the younger vines on the gorgeous Estate in Bolgheri, where you practically smell the ocean breeze. A DROP-DEAD KILLER PRICE. Ignore it at your own peril! This is a fantastic vintage --- it’s worth noting that the ‘15 Sassicaia received 98 points from Wine Advocate, and several 97s from other critics (including Wine Spectator). INCREDIBLE to see this wine under $20!!

Cabernet and Sangiovese fairly explode out of the glass, with fresh and dried cherry, cedar and black currants...a bit of earth and fresh herbs, too --- it’s medium-bodied, fresh as the Monday is long, lively, clean and already at this tender age drinking irresistibly well. Truly eye-popping at this price for this producer…! Back up the truck!! WILL GO. FAST!

Tenuta San Guido is named after the Saint Guido della Gherardesca who lived during the XI century. It is located on the Tyrrhenian coast, between Leghorn and Grosseto, in Maremma an area made famous by Italian Nobel prize winner Giosuè Carducci, and it stretches for 13 km from the sea to the hills.

Three are its defining characteristics: the Sassicaia wine, the Razza Dormello-Olgiata thoroughbred stud farm and the Bird Sanctuary Padule di Bolgheri. They divide the estate between the Padule on the coast, the horse's training grounds on the plain, and the vineyards planted up to 350 meters on the hills. The latter have been given their own DOC, the DOC Bolgheri Sassicaia, the first, and so far only case in Italy of a DOC contained in one estate.

The Tenuta San Guido is a 7,500-acre estate located in the province of Livorno on the western coastal outskirts of Tuscany near the village of Bolgheri. Marchese Mario Incisa della Rocchetta acquired it through his marriage to Clarice della Gherardesca in 1940.

The legacy of Sassicaia began in 1944, when Mario Incisa acquired a number of Cabernet Sauvignon and Franc vine cuttings and planted them on a sloping hillside of the San Guido estate, called Castiglioncello after the 11th-century castle at the vineyard's upper edge. This tiny, 3.75-acre vineyard stood alone until 1965, when a second Cabernet vineyard was planted with cuttings from the Castiglioncello parcel; the gravelly, 30-acre plot would give the wine its name: Sassicaia, "the place of many stones".

With the radical changes in the D.O.C. system of regulations as of the 1994 vintage, Sassicaia's extraordinary reputation was acknowledged through the Italian government's granting the wine its own appellation.

Pair with grilled steak or steak salad, hamburgers and other casual but flavorful beef dishes. Has good acidity to compliment marinara and bolognese sauces.