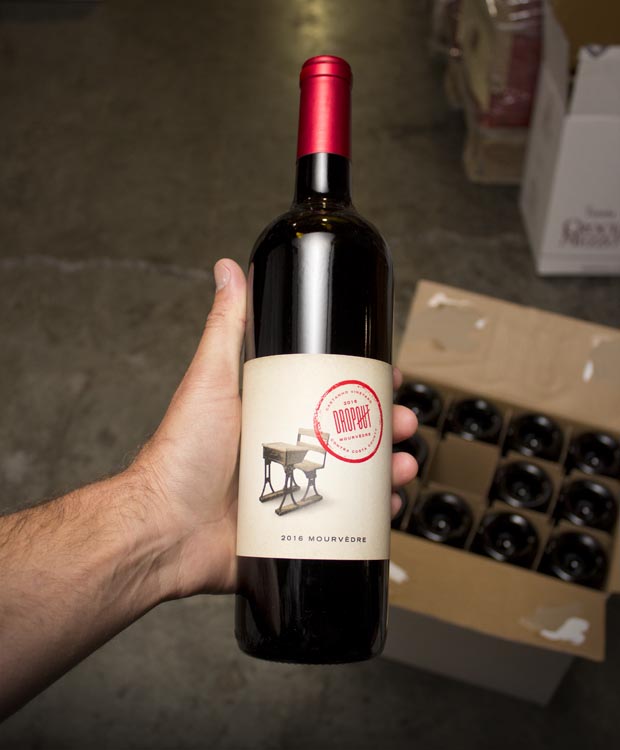 A Last bottle fave! Dropout! Go and run thee off to the butcher and secure thee some BBQ!! What a price!

This fantastic, juicy, totally rad Mourvedre is made by Jon Keyes, whose resume includes stints at Two Hands (Australia), as Thomas Rivers Brown's assistant winemaker at places like Outpost and Schrader, and who is currently making wine with Mark Herold for many of his high-scoring, much-collected wines. And he "dropped out" of college to do all this - thus the name for this lip-smacking new red!

Dive into a pool of plums, kids, do it now. There’s a rich earthiness, apple skin, and dark German chocolate goodness going on here, too, and enough acidity to keep it pumping. These relatively (for CA) old vines were planted in 1981! If you’ve had Jon’s fantastic Albarino, wait until you try the red…HOWEVER, he made but a handful and there is very little to be had, especially at a price like this! While it lasts...

Typical (deliciously) of Mourvedre from this part of Northern California overlooking the Sacramento Delta, we love the deep notes of apple skin, plum, and rich earth, with freshness and acidity front and center, and hints of earth and mocha on the finish. This is superb with most BBQ and definitely with a In 'n' Out burger! The grapes were 100% de stemmed and fermented in stainless steel tanks.

After studying chemistry at UC Santa Barbara, winemaker Jon Keyes dropped out of college to take his first winery job with California's ultimate boutique winery, Sine Qua Non. He then traveled to Australia, honing in his winemaking skills down under with Two Hands Winery in the Barossa Valley. He then returned to assume the position of Cellar Master at Napa Valley's Outpost Wines, under the guidance of winemaker Thomas Brown. Currently, Jon is making wine for winemaking pioneer, Mark Herold.

Though he has a remarkable resume, the person he is inspired by the most is his wife. When Kaitlyn had a desire to start an Albariño label, Jon couldn’t wait to begin another fun project. And that’s exactly what this project is, fun! Since Jon dropped out of college to pursue his passion for wine, Dropout was a fitting name. It’s also a bit ironic because Kaitlyn is a 1st grade teacher and a strong proponent of education. The common denominator that drove this project was their mutual love for Albariño, which is evidently expressed in the bottle.