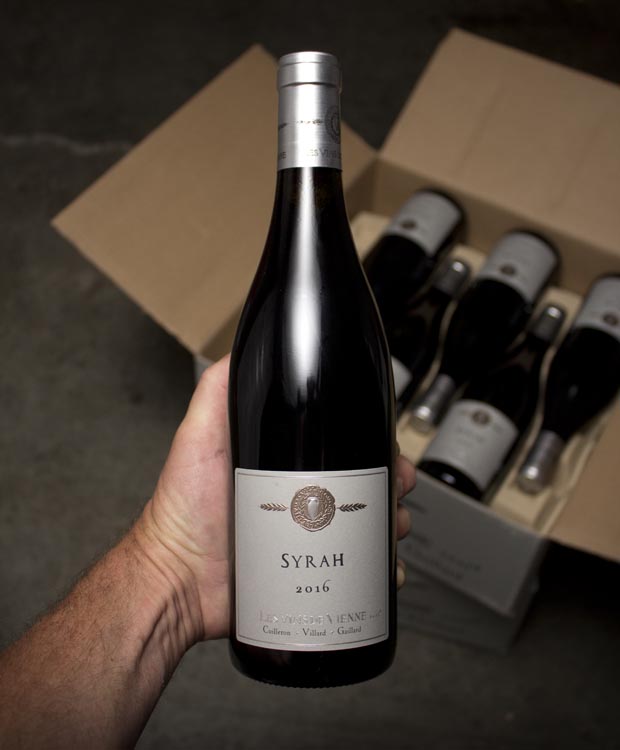 ROCKSTARS. Nope, not Eddie Vedder or Joan Jett or Jay Z, we’re talking WINE rockstars -- that is EXACTLY what we have here today with this BRILLIANT, gushing, pound-the-table-fantastic Rhone red at nearly 60% OFF! We got a tiny bit more of this massively delicious stuff, because we drank every bottle we had bought for ourselves! Don’t miss, please!

Here’s the whole quick rundown for ya: A collaboration inspired by history, Les Vins de Vienne is a partnership of Yves Cuilleron, Francois Villard and Pierre Gaillard, three superstar Syrah-specialist vignerons in Rhone (Google ‘em!). There are plenty of $100+ wines in this portfolio and tons of huge scores, but, trust your happily besotted wine merchant - even the entry-level wines are like rollercoaster, badass reds. For this price...it’s silly. Anyway, 2016 is a superb vintage, and this cuvee is INSPIRED, thrilling stuff!! For $15?? This gets great scores every year, but we brought in a small batch early, so don’t wait as it will be long gone...

Crazy sexy nose of brilliant Syrah -- deep black fruits, smoldering wood embers (you like that?? We’re serious, though), vanilla bean, espresso, cigar box…the wine is powerful and super-long, but the balance is perfect. Just an outrageously good bottle and a classic example of this region. We barely got enough to offer again, so if you got some last time and wanted more...today is the day...and for anyone who needs a new blockbuster Syrah experience...move quick!

Few people know about Seysseul wines. But they probably hold its neighbor just across the river, Cote-Rotie, and its famous Syrah in high regard.
Seysseul may be on the "wrong side of the tracks", on the left bank of the Rhone, just outside AOC classification, but it shares a lot of similarities with Cote-Rotie. Both have terraced vineyards planted on perilously steep south/southwest facing slopes. They share the same mica-schist and granite soil. And today they both have highly pedigreed winemakers working the land and making some outstanding wines.
There is one big difference - the price point. Since Vienne wines are classified as IGP Vin de Pays, and still relatively unknown, they don't command the high prices.
Previous Next

The Romans who settled the Rhône planted vines in Seyssuel and made vins de Vienne of some repute at the time. That tradition ended when Phylloxera wiped the vines out. The land went unplanted for a century.
Then in 1995 three leading winemakers from the Northern Rhône, Yves Cuilleron, Pierre Gaillard and François Villard made a surprising decision to leave the fabled slopes of Cote Rotie and head across the river to Seyssuel to start Les Vins de Vienne. The trio were drawn to Seyssuel by its connection to ancient winemaking history and the potential they saw there.
They set about resurrecting a long-neglected vineyard area on the steep hills in the commune of Seyssuel, a little bit further north of the town of Vienne. They planted just four hectares of vines to start and constructed the domaine atop the hill. Soon other winemakers took notice and followed suit after seeing the succes Les Vins de Vienne enjoyed.